Liberia Not Yet Ebola-Free 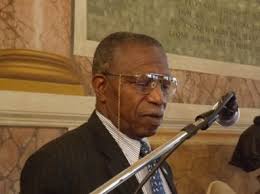 -Former Health Minister Warns
Outgoing Health Minister Walter Gwenigale has cautioned Liberians against complacency in the fight against the Ebola virus in the wake of declining new cases.He warned that doing so would drag the country back to the “high rate of cases that it had.”
Speaking at the Ministry of Information daily Ebola press conference in Monrovia Thursday, Gwenigale said most Liberians are becoming “very relaxed” in adhering to the preventive measures, adding, “That is wrong.”
He cited, as example, Taylor Town in Bong County where new cases are developing because of failure by residents to abide by preventive measures.
“We should not feel complacent in the fight against the Ebola virus before we lead our country back to the high rates of cases that we had,” he emphasized.