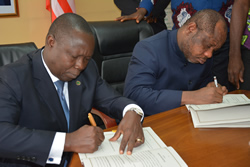 The Minister of Finance and Development Planning Hon. Samuel D. Tweah, Jr. on behalf of the Government of Liberia and the African Development Bank Country Manager Mr. Orison M. Amu have signed US$10 M as budget support to the Government of Liberia in order to meet its balance of payments obligations, as well as driving the objectives of the Pro-Poor Agenda for Prosperity and Development (PAPD).The signing today is intended to support the economic growth by improving accountability and transparency in public financial management and enhancing private sector competitiveness in Liberia. It will also run from 2018-2020.
Speaking during the signing ceremony on Tuesday, August 21 at the Ministry of Finance and Development Planning, Minister Samuel D. Tweah, Jr., conveyed, on behalf of President George Weah, profound gratitude to the African Development Bank for its support to the people of Liberia.
According to him, the President has reaffirmed his commitment to support the Bank in its effort to recapitalize.
“There is no way that the African Development Bank can have the level of influence in Africa’s transformation when the capital structure of the Bank remains the same’’ he added.
The Finance Minister noted that the purpose of today’s signing is to strengthen the public financial management reform at the Ministry of Finance and Development Planning and structure the payroll reforms of the wage bill along with the entire structure of the civil service.
‘’ We have to support the African Development Bank in whatever way possible and ensure that their support really amounts to something. We are looking forward to deepening our partnership, particularly as we go to the new round of ADF fifteen to see that both ADF and the Bank resources really have a big impact across all sectors in the country’’. Minister Tweah stated.
He reaffirmed Government’s commitment by moving toward a zero-based budget to redefine the structure of the Government budget.
“There are some policies and strategies we are developing to make the budget more efficient and cleaned up the budget thus ensuring that is more pro-poor for the Liberian people”, said Finance Minister.
He disclosed that this budget support will help to stabilize the reform process in our new national development plan process.
“We want to see the agriculture sector’s space yielding results in growth driving transformative way like rice being produced in the country”, he added.
For his part, the Country Manager, Liberia Country Office of the African Development Bank Mr. Orison M. Amu has expressed the Bank’s continuous support to the government of Liberia in meeting its balance of payments obligations, as well as driving the objectives of the Pro-Poor Agenda for Prosperity and Development (PAPD).
‘’I am happy to note that the cooperation between the Bank and Liberia remains strong and continues to grow’’ he said.
Mr. Amu, speaking at the signing ceremony of the Economic Governance and Competitiveness Support Project (EGCSP) said the signing is the third budget support to the Government of Liberia over the last eight years, bringing the accumulative amount to UA 72million (Equivalent to 100 million United States Dollars). The EGCSP Phase I: UA 30million, Ebola Sector Budget Support: UA 35 million and the current EGCSP Phase II: UA 7million.
The Bank’s Country Manager said the implementation of the project is expected to lead to improved private sector competitiveness, access to electricity for Industries, SME’s and domestic consumers, and improve the regulatory framework.