-Vow to Promote Peace, Tolerance, Unity
A two day symposium held at the Monrovia City Hall under the theme: “The Values of tolerance in Islam, moderation of Islam, and its impact on global peace” ended today in Monrovia with participants resolving to fight extremism, as well as vowing to promote peace, tolerance, and unity, amongst fellow Muslims and peoples of different faith of the world. The scholarly Islamic symposium, which assembled over 150 Islamic scholars from across Liberia, including government officials and guest lecturers from the Kingdom of Morocco, presented various topics including methods of cooperation and core values of tolerance and moderation in Islam; respecting the rights of both Muslims and none Muslims and peoples of other faiths across the globe; preaching the principles of Islam and the Holy Quran and the good messages of Prophet Muhammad(PBUH); learning to be generous at all times to the humankind irrespective of religion, status, creed, race or tribe; avoiding the use of profanity against fellow human beings; doing away with extremism, amongst others.
Several Islamic scholars from Liberia and the Kingdom of Morocco presented on these topics as participants are also filled with the knowledge and full understanding on the impact of the objective of the training.
See Below Full Text of the Resolution Reached at the King Mohammed VI Foundation’S Monrovia Symposium
“During the 2 Day symposium, the participants comprising more than 150 scholars, government officials, women, and stakeholders to discuss the role of Muslims in spreading the accurate picture of Islam by following the teachings of the Holy Quran and the tradition of Prophet Muhammad PBUH,

“After the participants were exposed to the principles of tolerance and the concept of moderation as taught by Islam from 10-11 September 2018 corresponding to 30/12/1439 to 1/1/1440, the participants resolved to the following:

1. To extend thanks and appreciation to the Ameer Almunineen Muhammad VI, may Allah sustain him in his efforts to consolidate peace and security around the globe in general and in the Muslim world in particular
2. Participants agreed in the symposium to refute and fight extremism in all its forms
3. To cooperate with the Foundation in order to achieve its noble objectives
4. To strengthen the values of peaceful coexistence and moderation
5. To seek moral and financial support for the Liberian branch of the Foundation to enable it execute its duties and functions adequately
6. To seek support for capacity building for the youth of Liberia to continue their education in different disciplines
7. To develop the capacity of our Muslim women in micro-business to support themselves especially the widows
8. To provide financial assistance for Muslim women to enable them establish small business that will protect their integrity
9. To open of exchange for culture, religion, etcetera, etcetera, between the Oulema of Liberia and their counterparts in Morocco
10. To provide training opportunities for Imams and Duat in Morocco
11. To increase the number of Haj ticket offered to Liberian Muslims every year
12. To support the first lslamic university project in Liberia-Annur University in the following areas: a. Financial and academically b. To provide assistance for the university in term of library, books, researches in all disciplines. And also special curriculum to teach Arabic.”

On day of the training, Sheikh Omaru Kamara, President of the King Mohammed VI Foundation, Liberia branch, said during his presentation to fellow Muslims: “The purpose of all the revealed scriptures sent down by the Almighty Allah is about respecting the humankind. It calls for respect for all mankind regardless of their tribe, creed, status in society, or religion affiliation.”
He added: “Allah created human beings in the best form from the day of creation. The Almighty Allah commanded the angels that he(God) made. Allah has honored the human family on earth-Allah honored us by subjecting his creation to human beings. He honored us (mankind) with responsibility on earth, and that resulted to the development ofcivilization on earth intended to govern human the community. He also did that so that so as to preside over humankind in the best form of his existence. Allah praised the Prophet Muhammad for being respectful to his creation. The verses of Islam came to serve humanity, and they also emphasized the protection of human lives on earth.”
Sheikh Kamara also lauded King Mohammed VI of Morocco and his Foundation for its continued support to the country’s Muslim community, also extending similar gratitude to President George M. Weah and the management of Monrovia City Corporation for providing its facility for the successful conduct of the symposium.
“Moderation and justice are characteristics of Islam. It’s therefore an obligation of all Muslims to follow these principles, including supporting tolerance and moderation,”Professor Atiqua Bouhouria of the King Mohammed VI Foundation based in the Kingdom of Morocco, also a member of the Moroccan delegation to the Monrovia symposium urged.
“It’s important to note that religious freedom is one of the fundamental principles of Islam. Respecting the sanctity of worship places is a cardinal responsibility of all Muslims. There’s absolutely no need for Muslims to allow their differences to overtake the good principles of Islam. Therefore, I urge you (Muslims) to cooperate and be tolerant with each other. Your religious differences should not stop you (Muslims) to practice the perfect will of Allah, and I urge all Muslims to be kind with each other,”Professor Bouhouria advised further. 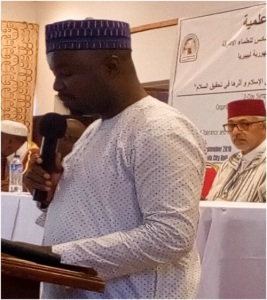 “We want to thank the organizers of this symposium. The need for this type of symposium has always been necessary, especially in the wake of increased wave of extremism, which is not part of the practice of Islam. We want to thank the King and people of Morocco for helping us tolerate and moderate Islam. Allah made mention on the practice of moderate Islam, and this is something that we in Liberia, especially Liberian Muslims and scholars, support very strongly,”Sheikh Sekou Dakowa, a representative of the League of Islamic Scholars of Liberia, said during the official closing of the symposium.

Dr. Idriss Alza’area Almubaarakee, Professor of High Education, College of Sharia and former Vice President of the University of Qara Weyeen, makes remarks during the closing of the symposium 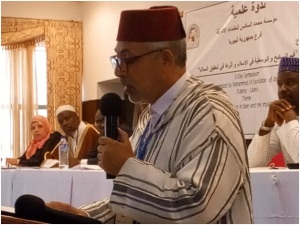 “I want to thank Muslims and the President of Liberia for the warned welcome we received upon our arrival. I want to thank Sheikh Omaru Kamara and the entire Muslim community for their support to this initiative. We would like to see President George Weah of Liberian continuously support this good step of religious tolerance in this country. It’s a laudable effort on his part, and we call on everyone to back this effort,” Dr. Idriss Alza’area Almubaarakee, Professor of High Education, College of Sharia and former Vice President of the University of Qara Weyeen, also opined at during the close of the symposium.
He added: “Ideological tolerance, religious tolerance, and value systems are issues that always protect believe systems, something the Almighty Allah also talks about. There there’s no compulsion in the practice of Islam. A good Muslim must continue to be good to unbelievers. Allah says one should be good. We are talking about tolerance with Muslims and none-Muslims because that’s what Islam stands for. Our attitudes must always represent the religion. There’s always a serious need for tolerance than ever before.”

“We hope that whatever resolution that will be reached amongst the participants here today should reflect those core values of tolerance in Islam, which has been repeatedly emphasized here by all the speakers,” Internal Affairs Minister Varney Sirleaf expatiated.
He added: “I want to urge Imams that you are going to be delivering sermons in the various Mosques across this country, and we expect that you will deliver messages that will promote religious tolerance and promote those great values of Islam. In short, we are urging you to Ambassadors of Islam. We count on you a lot to deliver the goods. Therefore, we ask you to follow these good tenants of Islam. As Muslims, we must be good to others.”
“Wherever you find yourself, especially with the little things we do, they (attitudes of Muslims) will always reflect on our religion (Islam). As Muslims, we must always be honest in whatever we do. Before I take my seat, I will like to thank everyone for taking part in this program. Liberia is the only country that we have, and I therefore urge you to continue praying for Liberia,” Minister Sirleaf concluded.