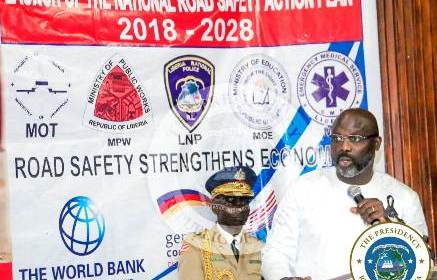 President George Manneh Weah has given his administration’s endorsement for the implementation of a five-pillar Road Safety Action Plan developed by the Ministry of Transport and relevant agencies and partners.
The rather ambitious US$22.1 million lives-saving and accidents-minimizing project was Wednesday, October 3, unveiled by the Ministry of Transport at the Ministry of Foreign Affairs on the Capitol Hill.
The launch of the project comes on the heels of sporadic road accidents, many fatal, and massive ongoing nationwide roads construction and pavement efforts by the government. Speaking at the launching ceremonies, President Weah thanked the Ministry of Transport and its partners for developing such a novel Action Plan, describing it as a giant step toward his government’s Pro-Poor Development Agenda rooted in road connectivity.
“The issue of road safety is cardinal in Liberia’s advancement process,” President Weah said, adding, “This is a good policy document that will go a long way in helping to curtail road accidents and fatalities throughout the country.”
He expressed delight about the level of cooperation and synergy evolving amongst the relevant government agencies, such as the ministries of Transport, Health, Education, Ministry of Public Works and the Liberia National Police and others that are working with Liberia’s international partners in developing an action plan that sets the stage to educate citizens about the importance of road safety.
The President bemoaned the loss of citizens’ lives to road accidents only because of the lack of awareness and effective enforcement on road safety laws and procedures.
He said it is important for the government, through the relevant agencies, to muster the courage in enforcing traffic laws that are on the book so that violations and accidents and the resultant loss of precious lives would be minimized.
In order to effect the smooth implementation of the road safety action plan, President Weah instructed that violators of traffic laws, including those constantly parking old cars along the roadside, to be fined in keeping with relevant laws.
Also, President Weah called on the relevant agencies to reduce the timeframe of the plan to from ten years to six years so that its implementation falls within the government’s first six-year tenure.
The five-pillar Road Safety Action Plan, the first of its kind by the Liberian government, is intended to provide massive public education on road safety toward easing traffic violations and accidents in the country.
The government through the Ministry of Transport said it already has US$3 million of US$22.1 million needed for the implementation of the plan.