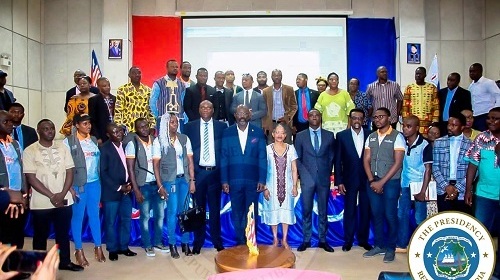 Liberia’s President, George Manneh Weah, says his administration will do all it can to support the state-run University of Liberia to reach its full potential and become second to none.
The President, who is officially called Visitor to the University, assured UL administration and students that he would leave no stone unturned in ensuring that young people are provided the necessary learning facilities and environment that engender quality education.He gave this assurance last Thursday, October 4, 2018 on the UL Fendell Campus outside Monrovia, when he officially launched the “Go-Live of the University of Liberia Automated Digitization System (ePortal)” intended to reduce age-old registration rigors for students.
The Liberian leader said making the University of Liberia one of the best in the sub-region remains a top priority, adding that his government is committed to lifting the quality of education in Liberia to higher heights.
Digitizing student registration process at the University of Liberia is part of the initial pro-poor for prosperity and development initiatives promulgated by Government early this year.
Meanwhile Government had contracted an ICT firm to set up what is called an ePortal to ease the registration of students, as the UL registration process had been a source of frustration and commotion for both administrators and student.
Launching the project, the UL Visitor indicated that the completion of the ePortal was indicative of his desire to transform the UL into a modern learning institution.
He hailed the digital system as very good for the students who had perennially agitated against what normally was seemed disorganized and at times chaotic.
President Weah called on the students to make use of the e-portal, as he reflected on his own experience with digitized registration process as a student at DeVry University in the USA,where he obtained undergraduate and post-graduate degrees.
He said:“I had the opportunity to sit in a classroom in the US and when I went to register they put me on the computer for the first time,”.
He further reflected, saying: “You know in Liberia, we are used to doing everything manually. So, they put me in a little room for five subjects. When I finished with entering my registration information in the ePortal, I submitted but was still sitting, not knowing the information had gone already.
In another experience, after a two hour-thirty-minute test, I sat for one hour waiting for my result.
“Later, I got a call from downstairs and when I reached down, I met my students’ affair teacher who handled my results.”
Meanwhile the Liberian leader used the occasion to call on UL students to use peaceful means to resolve issues instead of resorting to violent means, adding that the achievement could not have been possible had the students not sought dialogue with the government over an untidy registration process.
He also thanked Dr. Ophelia Inez Weeks, President of the University of Liberia, for her courage in contributing to the process leading to the modernization of the UL.
“With one understanding and cohesiveness, we can go ahead positively,” he said.
Also speaking at the launch of the ePortal, Prof. Varmah Blamah on behalf of the UL administration hailed the Liberian leader for responding to the needs of the entity.
The UL administration said President Weah’s support which resulted into the building of an ePortal at the University did not only provide great relief to the students but also brought calm and order on campus.
“It is the first time we are transitioning from manual registration to digital registration. Our dream is to be amongst the 7th best universities in the region,”
The students of the University also thanked President Weah for the development which they described as relieving.
A Liberian digital company, MWEETANA is the service provider for the UL ePortal Digitalization System.