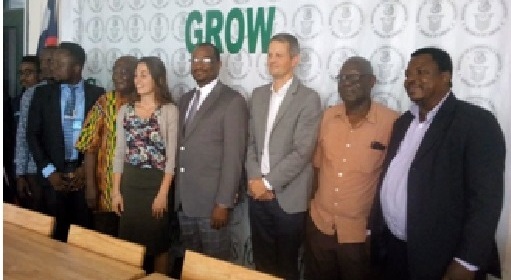 International experts on the production of Cocoa in the sub region, Guinea, Sierra Leone and Liberia are in the country to hold series of workshops with stakeholders in the sector for the revitalization of the cocoa industry in the region.
The delegation headed by Mr. Prince Kamara, National Project Coordinator of the Mano River Cocoa Value Chain Development Project, of the International Trade Centre in the Netherlands, on Monday, October 8, 2018 paid a courtesy call on the acting Minister of Commerce and Industry, Mr. Nyema Wisner to explain the objectives of their mission to Liberia.Speaking on behalf of the four-man delegation during the courtesy call, Mr. Kamara said their mission here in Liberia is to conduct a series of workshops in the Country that aims at telling exporters and farmers of cocoa in Liberia of its importance.
He said the workshop, which will be held at a local hotel in Monrovia, will bring together stakeholders in the sector, and will help to encourage farmers and exporters to do more in their services to the public and the exporting world.
Speaking on behalf of the Minister of Commerce and Industry, Professor Wilson Tarpeh who is currently out of the country, acting Minister Wisner who made specific reference to the past, said cocoa farmers and exporters have made headways in Liberia, but noted that due to the civil war in the country such activities has drastically declined.
Minister Wisner, who is expected to make a remark during the start of the work on Wednesday, October 10, 2018 praised members of the delegation for their farsightedness.
The visiting delegation which comprised of Ms. Lisanne van Beek of the Netherlands Ministry of Foreign Affairs, Mr. Bart Siob International Consultant ITC, Netherlands, and Mr. Prince Kamara, expressed gratitude to the acting Minister for accepting the request to pay a courtesy call on him.