Wolokolie Urges Liberians To Shun Discrimination Against The Blind 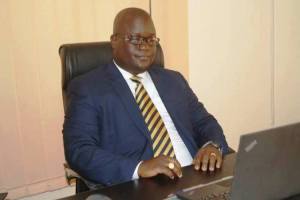 By Calvin Brooks
The Deputy Minister for Fiscal Affairs at the Ministry of Finance and Development Planning is urging Liberians to stop discrimination against the blind in the country.
Minister SamoraWolokolie stated that blindness is not a state of choice, but a situation beyond the control of humans and society.Minister Wolokolie made the statement in Monrovia on Monday at a program marking World White Cane Safety Day held at Monrovia City Hall.
According to him, the Coalition for Democratic Change (CDC) Government will ensure that the needs of people with disabilities are addressed adequately in the country.
Wolokolie indicated that government and private institutions operating in the country should ensure that their buildings and offices across the country are access friendly to people with disabilities, particularly the blind.
Wolokolie called on government to increase its support to disabled institutions as the fiscal space of government expands in the near future.
He pointed out that government, civil society organizations, and students should change their attitude towards the blind community, noting that they too deserve dignity.
The Deputy Finance Minister asserted that the blind community does not need handouts but employment to improve their living conditions.
He emphasized that people with disabilities should be treated with respect and honor rather than being treated as less human within society.