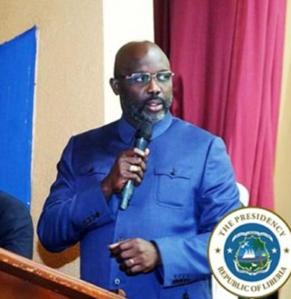 The President of the Republic, H. E. George Manneh Weah, has declared Monday, February 18, 2019 a Day of National Mourning in the aftermath of the tragic death of over 40 citizens in a mudslide in Gbanipea, Tappita District, Lower Nimba County.
The Liberian leader said Liberians and foreigners within our borders needed to come to terms with the huge catastrophe and show sense of empathy to the victims and their families.He also declared the affected area a “National Disaster Zone”, ordering the national security apparatuses to isolate the area, provide security and prevent illicit mining.

A technical committee headed by Internal Affairs Minister, Varney Sirleaf was ordered by the President to work with the National Disaster Management Agency to move as quickly as possible to the affected area, conduct intensive search for possible survivors and render appropriate assistance to affected families and communities.

Already, the Liberian leader has sent units of the Armed Forces of Liberia who have since been deployed in the disaster zone to assist with the rescue and recovery efforts.

President Weah is calling on national and international organizations and development partners, mainly the United Nation, ECOWAS, European Union, United States, China and other friendly nations having expertise in disaster management to join the technical team set up to bring needed relief to individuals and families affected by the disaster.

The President described the mudslide catastrophe as “totally a depressing for our country at a time my Government is endeavoring to create an enabling environment for our people to improve their lives”.

The President expressed condolences to families who lost loved ones during the incident and wished speedy recovery for those who sustained injuries.

He assured that the Government will do all within its powers to provide every support and assistance that would be needed in the affected region.