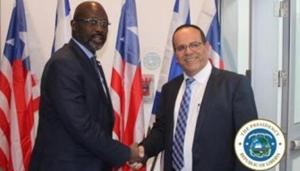 -Pres. Weah Makes Headway In Israel
-Amplifies Pro-Poor Agenda
Liberian President, George Manneh Weah, is said to be making significant headway in Israel in an attempt to further cement bilateral relations with the Holy Land.
According to report from the Middle East, the Liberian Leader has been persuading cross-section of businesspeople and organizations to Liberia’s diverse business opportunities in the State of Israel, while accentuating his determination to explore every available means that will pull the impoverished majority of Liberians out of poverty.Pres. Weah told Israel’s senior officials and business executives that his mission to cement relations with Liberia’s traditional allies, including the State of Israel,is aimed at actualizinghis government’s Pro Poor Agenda for Development (PAPD) which seeks to give power to the people, create jobs and improve the economy and sustain the peace through good governance and transparency.
His assertions were contained in a statement delivered Tuesday, February 26, 2019 when he visited Israeli’s Agency for International Development, MASHAV.
Addressing executives of MASHAV, Pres. Weah hailed the people of Israel for the support rendered to Liberia’s agriculture, health and other sectors.
Reiterating his unwavering quest to improve the lives of every Liberian, Pres. Weah termed his election and the democratic formalities preceding it,“a clear evidence of the strength” of Liberia’s nascent democracy,respect for the rule of law, and the willingness of Liberians to live in harmony.
“A sustainable and lasting peace can only be maintained when it is buttressed and underpinned by growth and prosperity for all,” the President told the Israeli, adding that “Even as we realize this, and begin to formulate policies that would reduce poverty and improve the economic well-being of our people, we find our economy negatively impacted by external economic shocks, including reduction in global market prices for our major export commodities such an iron ore and rubber,” something according to him, has led to an adverse balance-of-payment situation which has seen a depreciation of the Liberian dollar to the US dollar.
Making Liberia’s case further with specific focus on agriculture and infrastructure development, the President told the assembly of Israeli businesspeople and diplomats that agriculture and infrastructure development remain key to Liberia’s economy revitalization; saying, the country which has one of the highest rainforests in the world is blessed with a small population and a significant endowment of natural resources.
With MASHAV, the President said, Liberia needs the “Israeli experience”. Noting that, “Israel over the years, since its founding, has improved its infrastructures, increased food production through agriculture, and is now the leading technology hub.
He noted further: “We are here today at MASHAV, the Israel Agency for International Development and Cooperation. We are informed that MASHAV was established to assist friendly nations to overcome development challenges, by sharing know-hows and technologies which provided the basis for Israel’s own development.”
As head of the Liberian Government, the Liberian leader said “we can make tangible millions of dollars pumped in the country’s agriculture sector with shared knowledge in the areas of research and development of improved seeds, adaptation of new high-yield species and varieties, development and implementation of post-harvest practices.”
In an effort to attract the attention of the MASHAV Executives, Pres. Weah asserted that Liberia now seeks Israel’s collaboration and support for the purpose of introducing modern technologies and agro-technical methods in his country.
“Such knowledge and skills transfer would increase the levels and quality of agricultural production, and ensure food security and sustainable development,” he stressed.“We are of the strongest conviction that the most effective means to a rapid reduction of poverty in our country is to develop our potential in the field of agricultural.”
Meanwhile, Pres. Weah also called for agro-financing to the private sector in major priority commodities including rice, cocoa, coffee, and oil palm, among others, saying, Israel’s leadership in agro-technology could also assist Liberia in the rapid transformation of the sector through the use of smart technologies.
Following an overview of MASHAV’s ongoing activities in Liberia, its Director Ambassador, Gil Haskel has offered to train qualified Liberians at its facilities in Israel in various areas of agriculture.
The MASHAV Director assured the Liberian Leader and delegation that his organization would prioritize the interests of Liberia.
Pres. Weah recently led a small number of delegations to Israel to strengthen bilateral ties and seek the intervention of the Holy land in key areas, including agriculture and infrastructure development.