GC, Others Intensify Efforts To Police Artisanal And Small-Scale Miners 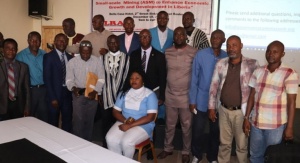 The Governance Commission (GC) in collaboration with the Ministry of Mines and Energy, the Liberia Revenue Authority (LRA), Civil Society Organization (CSO) and other partners on Thursday held a special session to review the report from the Artisanal and Small-scale Mining (ASM) Policy Dialogue.
Back in December 2018, the dialogue, held at Bella Casa on Tubman Boulevard, was under the theme “The Effective Management of Artisanal and Small-scale Mining to enhance economic growth and development in Liberia.”The review session of the policy dialogue report on ASM was aimed at cross examining the operational framework on safe mining practices, deforestations, land degradation, Access to formal markets, revenue generation and gender related issues.
The report draws on existing facts and opinions expressed by the stakeholders and experts at the just ended policy dialogue. The dialogue which was organized to bring out findings based on different researches done on the state of the ASM Sector led to the adoption of the following actions plan, which was flagged out during the review session based on findings from presenters and stakeholders:
 The need to strengthen the existing regulatory framework governing the ASM sector. This will help to address the issues of illicit mining and proliferation of aliens in the sector;
 Digitalizing the ASM sector should be a priority in enhancing the sector so it serve as a reference point for the government and relevant stakeholders;
 MME, LRA, Mining Association (dealers and brokers) and other institutions involvement in the ASM sector and the need to amalgamate forces to tackle the problems and issues affecting the sector for enhanced performance;
 Efforts to promote and strengthen ASM through cooperatives, unions, federations and trade associations; and,
 The used of dangerous chemical such as mercury that is having an adverse effect on the soil and a spillover effect to the communities needs to be halted immediately as the preservation of the environment is one of the principal goals of the Sustainable Development Goals (SDGs).
The report also highlights major concerns and recommendations aimed at revitalizing the ASM sector, which according to stakeholders continue to suffer setbacks. The mainstream government entities – Ministry of Mines and Energy (MME), Environmental Protection Agency (EPA) and Liberia Revenue Authority (LRA), which have the statutory mandates and oversights for the ASM sector, are encountering daunting challenges in managing and controlling the sector.
According to the report, authority has up to present not been able to curtail the influx of aliens, illicit mining, compliance for proper safety measures and the use of chemicals such as Mercury that are increasingly dangerous to the health of the community people and as well causing the government to continue to loss huge resources at the detriment of the country and its populace. The report is calling on government entities, including the MME, EPA, LRA, and the GC, to jointly collaborate to set up an effective monitoring framework to combat challenges on the environmental impacts of mining methods – clearing, deforestation, and river dredging affecting the environment. In addition, the issue of child labor that is also increasing in the ASM sector, and needs government swift intervention.