To Fight Against Piracy 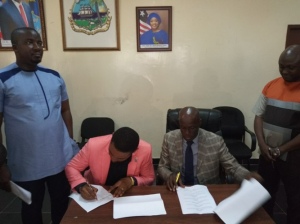 -MICAT, LIMU Join Forces
A Memorandum of Understanding (MOU) has been signed by the Ministry of Information, Culture Affairs and Tourism (MICAT), the Liberia Movie Union (LIMU) and the Liberia Intellectual Property office to enhance, sustain, and elevate the fight against piracy.Piracy is an illegal copying and distribution of movies in print, video, Digital Versatile Disc (DVDS) or any electronic file that portrays visual.
Speaking at the signing ceremony Friday in Monrovia at MICAT, Information Minister, Eugene Nagbe stated that the signing of the MOU was the beginning of government’s support to LIMU. “What we are about to sign here is the beginning of our support not the end” Min. Nagbe noted.
According to him, the most valuable property a person can own is not the tangible properties, but rather the intellectual property, citing that no country can develop in the absence of the protection of intellectual properties.
“If we can work together harder to fight piracy and theft of intellectual properties, then we can make a milestone. Because, even if, we give all of the supports and you make your film but cannot get anything out of it then all our efforts will be for nothing. So we have to tackle all of them together; the deficit with capacity building, equipment, costume and so on” the Information boss cautions filmmakers.
The Minister has lamented that intellectual properties have been stolen for a long time across the length and breadth of Liberia, stressing that if the Government of Liberia has put measures in place to minimize and subsequently eradicate piracy, there would have been much benefit the industry.
“With all the hurdles and injustices you go about, you produce a movie and it is duplicated all around the place and you earn nothing. This time that is where we need to take the fight.”
The Liberia Information Minister disclosed that individuals who are engaged in theft of intellectual properties are not in hidden but cited that the government has to muster the courage to prosecute them.
He recalled that famous personalities in the world would not have come to prominence if their intellectual properties were not protected, naming Benjamin Franklin, Alexander Fleming and Alexander Graham Bell as beneficiaries of the protection of intellectual property.
Min. Nagba asserted that movie industries are private sector driven, citing that the government was trying to augment the capacity of LIMU to enable it get on its feet to solicit support for improvement, adding that “this sector is private driven and the government should support you get on your feet and expand”.
Meanwhile, the President of the Movie Union, Frank Artus stated that the signing of the MOU with MICAT was a historic day for the film industry in Liberia and also in the lives of filmmakers in Liberia.
Artus extolled the Information Minister and the Government of Liberia for the Initiative to fight piracy, stressing that fighting piracy will enable filmmakers cater to their needs and that of their families and be up to the task internationally.
“What you have done under the leadership of President Weah have created job opportunities for filmmakers. You have done it all that filmmakers ever wanted in their lives” He noted.