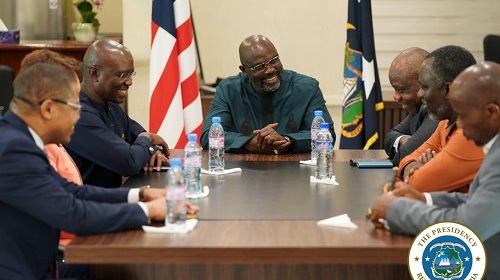 Monrovia, Liberia: His Excellency President George MannehWeah has held talks with officials of the Liberian office of the Work Bank Group and reiterated Government’s commitment to tackling the prevailing economic challenges facing the country. Meeting the World Bank officials Wednesday, June 19, 2019, President Weah recounted concrete actions that his government has been taking to salvage the ailing economy inherited; saying transparency and accountability policies at all levels of government are being enforced.

He said Government would continue to uphold the independence of the Central Bank of Liberia (CBL) towards implementing measures to resuscitate the country’s economy.

President Weah said his recent appointment of some officials of the CBL ahead of a vetting process to pick a new CBL Governor is part of efforts to ensure a credible and independent Central Bank.

He said government has frozen further borrowing from the CBL for liquidity stabilization purpose.

President Weah thanked the World Bank Group and its officials for their support to Liberia’s economic recovery efforts and promised Government’s cooperation and support to the Bank’s new Country Manager, Dr. KhwimaNthara.

In remarks, Dr. Kerali said it was a great opportunity working with President Weah and his Government during his term.
He said World Bank Group remains committed to helping Liberia. He disclosed that the Bank would be increasing its funding to US$210 million for a three-year period.
Dr. Kerali expressed the interest of the World Bank Liberia team in working with the government to review some concessions agreements.

He stressed the importance of the Southeastern Corridor Road Asset Management Project (SECRAMP), promising that the World Bank would ensure that the project becomes a reality.
“We will support you and people of Liberia to achieve their potential,” Dr. Kerali told President Weah.