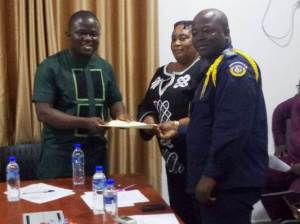 The Chairman on Liberia National Commission on Small Arms (LiNCSA), Teklo Maxwell Grigsby, has said as Liberia consolidates its peace, it is important that attention be paid to the conflict and fragility triggers, and the proliferation of small arms that have destabilizing effects. “The proliferation of small arms and light weapon pose a significant threat to peace and stability not only in Liberia but also in the sub-region, since they are the weapons of choice and necessity of rebel movement,” Grigsby said.
“Liberians can attest to the destructive impact of small arms; the Manor River Union countries have seen and experienced the devastating and destructive effects of small arms and light weapons,” he pointed out.

Grigsby said in remarks Wednesday at the official ceremony marking the turnover of office at LiNCSA that Liberia as a country has witnessed many conflicts and instability in various forms in Africa and around the world because of the sale of illicit weapons across borders.

According to him, LiNCSA is one additional step in the effort by Liberians to control small arms and light weapons and to combat illicit trades in arms.

“It is one step toward our commitment to continue to work with other individuals, institutions and countries to robustly combat illicit trade and enforce arms control to ensure that we eradicate the black market sale of weapons that continues to destroy our country and terrorize and kill our people,” Grigsby stated.

He, however, assured staff of LiNCSA that under his leadership the commission will remain an ardent advocate for the control of small arms and light weapons and will continue to engage partners locally and internationally.
“My leadership, among other things, will concentrate on education and sensitization programs, civilian arms marking, record-keeping, weapon collection and destruction of small arms and light weapons, networking and collaboration with Mano River Union counterparts,” he pointed out.