-Promises Thorough Probe Into Cause Of Incident
His Excellency Dr. George Manneh Weah early Wednesday morning, September 18, 2019, visited the scene of the fire disaster that reportedly left 28 persons including children charred to death, promising the Muslim community of government’s cooperation and provision of the necessary resources to thoroughly investigate the cause of the fatal incident.“It is completely heartbreaking and unfortunate that we lost this high number of innocent citizens to fire. On behalf of my government, I extend sincere sympathies,” the President told the crowd the community residents who had gathered to behold the tragic scene.
The President assured the families and Muslim community that government will work with them to investigate the cause of the fire and to assist the bereaved families in any way possible and provide assistance to four others said to be in critical condition at a local hospital.
The Liberian Leader, accompanied by several officials of government, described as unfortunate, pitiful and horrific the fire incident that has befallen the nation and the Muslim community.

“I was touched by the terrible news and decided to rush here this morning to see for myself the families of the children and the community leadership to extend my sympathy,” the President said. “It is saddening even when a single citizen dies; what much more about 28 children, potential leaders, who were aspiring for a better and prosperous future.” 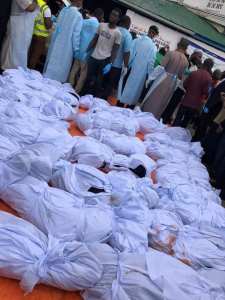 President Weah stated: “It is saddening to mourn the loss of these of kids, just after few days when we came together to celebrate the home-coming of Muslim pilgrims from Mecca. Please take solace in the Almighty Allah during these trying times because he is the creator—the giver and retriever of life.”

“Let Allah give you strength to continue what you were doing for the deceased children for other children so that they become good citizens,” he told the bereaved families.

The Liberian Leader called on Liberians irrespective of their religious beliefs to pray for the bereaved families during their difficult and trying times.

The children, according to the Grand Mufti of Monrovia, Shieh Abubakar Sumarou, will be buried in a mass grave after the funeral rites.