“OUR HEARTS ARE WITH YOU” 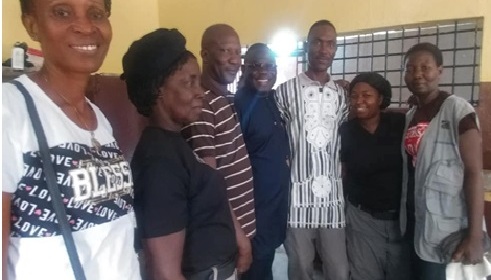 -PRISON FELLOWSHIP LIBERIA COUNTRY REP. FRANCIS KOLLIE TELLS FEMALE INMATES
-AS GROUP DONATES ITEMS VALUED AT LD100, 000
By Varney Kamara
Monrovia-There’s still plenty of hope to be desired and that all is not lost in life, Prison Fellowship Liberia (PFL) Country Representative Reverend Francis Kollie has told female inmates at the Monrovia Central Prison (MCP), where the group Friday, January 3, 2020 donated a host of new year gifts that included used clothes (pants, blouses, t-shirts), chloride, and other vital detergents for the inmates.
“Our hearts are with you,” Rev. Kollie passionately told the inmates as he received a jubilant reception from the already enthusiastic convicts who shouted “Thank You Papay”, a Liberian parlance which refers to a father, or an elderly person.

The items, valued at over LD100, 000 (One Hundred Thousand Liberian Dollars), according to Rev. Kollie, served as Prison Fellowship Liberia way of identifying with the inmates for the year (2020).

Prison Fellowship Liberia gifts to the female inmates came as local and international rights groups report bad conditions that convicts across the country are facing at various cells. There are 16 prison centers across Liberia with over 3,000 inmates. Currently, there are 200 female inmates held at different prison locations across Liberia, Rev. Kollie also informed this news outlet a fortnight ago.

Also, a report released by Amnesty International last year uncovered potential health hazard at the country’s prison centers. Due to a lack of floor space some inmates had created makeshift hammocks made of grain sacks slung three or four metres above ground.

Under Liberian law, prisoners must undergo a basic health assessment when they come to prison, but this simply isn’t happening, some inmates informed this news outlet, a situation Prison Fellowship Liberia, through its partners, has been helping to address across the country.

Prisoners and staff said people sometimes break their ribs or dislocate their shoulders falling from the hammocks at night, a situation Prison Fellowship Liberia has intervened in order to ensure speedy trial for inmates to reduce over-crowdedness. Severe overcrowding in some prisons has a serious effect on the health and safety of prisoners. Monrovia Central Prison, Liberia’s largest, was designed to hold 374 inmates but in July 2011 when Amnesty International visited it was holding 839 prisoners. In some cells there isn’t room for all inmates to lie down at the same time so they sleep in shifts.

“We are working hard to ensure that justice is served very soon. If someone brought you here and cannot follow-up his or her case, you cannot be kept here perpetually. Though we are not here to support crime in the society, we are also against violation of the rights of inmates, many of who have overstayed here, causing serious health problems for them,” he added.

Looking forward to the New Year, he assured the female convicts who were up to thirty-two in number, that the Prison Fellowship would construct a recreation center for them to time to exercise. “As part of our plans for this New Year, we intend to build a recreation place here that will afford you the time to sit and exercise and have fun amongst yourselves. This is also in observance of your fundamental human rights, and it is our responsibility to ensure that you are given these basic human rights.”

He also praised the administration at the MCP for the level of prison transformation system that has been carried. “I want to thank the Government for its support to the Monrovia Central Prison. I particularly want to recognize the hard work that has been carried out by the prison superintendent, Mr. Varney Lake, whom I believe, is one of the best superintendents this MCP has had over the years. Today, we no longer here that inmates are beaten, harassed or molested here. This is great news, and so we want to thank Mr. Lake and his team of officers for a great work. We are encouraging you to do more.”

Responding, MCP Superintendent Col. Varney Lake expressed gratitude to Prison Fellowship Liberia for the donation, further terming the gesture as something that would help better the lives of the inmates.

“I am very happy and honored for the gesture today. It’s a great thing that Prison Fellowship Liberia is doing in doing in this country. We must command the PFL for the donation which, in my mind, would help to give some sense of civility to inmates here,” Col. Lake, who was also certificated and gowned for his hard work and innovation toward the improvement of the conditions of inmates asserted.

Col. Lake also explained that professionals working at those centers are there to ensure that they give hope to inmates and impact them with knowledge and skills that would better their lives during post-prison life.

“The whole idea that we are here for as prison guards is to mentor inmates here and give them what they think did not get in the larger society. The goal of our being here to protect, nurture, and control inmates that would help transform them,” Col. Lake elucidated as he received a huge applauds from the female convicts.