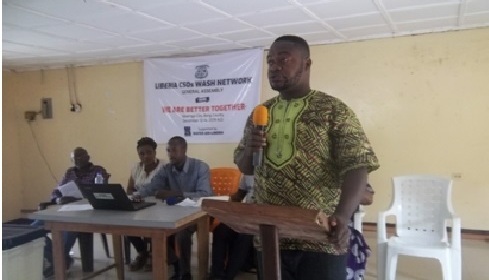 -LIB CSOS WASH ASK GOL TO SAFE THE SECTOR
The Liberia civil Society Organizations on Water, Sanitation and Hygiene, (CSOS WASH) Network has called on the Liberian Government, especially the WASH Legislative Caucus, to constitute a joint independent investigation committee involving CSOs, NWASH Commission, the Liberia Anti corruption Commission and the Ministry of Justice, among others, to jointly investigate and verify the claims and counter claims and validate also the Last Well projects in Liberia.

The Network further wants several public institutions, officials and private individuals, among others to be summoned by the WASH Legislative Caucus to show cause why, if any, why they should not be held in contempt for either over stepping their respective duties or undermining the mandates of others by their respective actions taken or failed to be taken as regards their respective involvements, among others, within the Last Well’s projects and operations in Liberia.

According to a WASH Media recent dispatch, the Lib. CSOS WASH Network reached the decision in an Executive Session hosted by its Board chair, Madam Malinda B.Joss, founder and CEO of the Women and Children Development Association of Liberia (WOCDAL) last Friday, January 3, 2020 in Duazon, Sand Beach Community on the Robertfield Highway in Margibi County. The meeting, chaired by its newly elected and inducted National Chairman Mr. Augustine N.Myers, disclosed that the Network attention has been drawn to a shameful and disdainful situation that is brewing amongst key actors within the Wash sector in Liberia.

The CSOs WASH wants the leadership of NWASHC and its investigative team, the leadership of the Last Well and its implementing partners in the five counties operated, the Ministry of State for Presidential Affairs, The Finance and Development Ministry, the Minister of Public Works, Hon. Maputu Nyanpan along with his Deputy Minister Hon. Bantyoe, including the present and former Assistant ministers for Community Development in persons of Hon. Bolton Dennis and George Yarngo;

The CSOS WASH Net which comprises over 14 organizations nationwide, wants individuals and institutions or state actors found undermining the Liberian nation-state and government to the detriment of the citizenry and residents should be brought to book and punished to serve as a dissuade to the reoccurrence of such appalling dealings in the WASH sectors.

According to the Liberia CSOs WASH Network, it has worked over the years to end fragmentation within the WASH Sector by advocating for the establishment of the National WASH Commission that has the mandate to promote and regulate the development, management of WASH services while serving as the principal government entity on water, sanitation and hygiene throughout in Liberia.

The WASH Commission on December 19, 2019 published an investigation it conducted in Bong and Grand Gedeh Counties from February 2019 to December 19, 2019 about the Last Well’s claims to have served over two million persons with access to safe drinking water in five counties in the country. According the NWASH reports, the Last Well claimed to have provided over two million persons in Grandkru, Bomi, Gbarpolu, Bong, and Gedeh Counties with Safe drinking water in Liberia.

The Commission adjudged Last Well of misleading the Liberian government and people by proclaiming to have provided safe drinking water for over two millions Liberians whereas the total population of the five counties total only 684,159 people, which figure is far less than two million persons. The CSOS WASH Net regrettably noted also that the ministry of Public Works which chairs the board of Directors of the National WASH Commission of Liberia (NWASHC) issued contradicting Statements supporting the Last Well’s falsehood in the Sector.

The Network expressed disappointment over Deputy Public Works Minister Benjamin Bantuoe’s Press statement that President George Manneh Weah has done nothing to bring partners in the sector while later contradicting himself that President Weah has brought in partners to provide safe drinking water in Liberia. The Net work noted that the 11-months investigation conducted by National WASH Commission has adjudged the Last Well of breaching National Integrated water Resources Management Policy of 2009, but reneged on applying penalty for said violation owing to unknown reasons.

The Network also expressed disappointment in the NWASHC investigation establishing that out of 42 wells claimed to have been dug and 56 rehabilitated, Exhibit number#7 by Last Well in Grand Gedeh County, nothing could be found there. But regrettably the NWASHC failed again to take punitive actions against the Last Well when NWASHC verification team could not even identify and verified a single well funded by the Last Well in the entire Zwedru communities including Disco Hills, airfield, among others, as of the date of the NWASHC team’s verification in Zwedru.

The NWASHC investigative team further discovered that over 50% of the Last Well’s local contractors or implementing Agencies are not in legal standing with the government, by means of obtaining sectoral clearances from the relevant governmental bodies, but the NWASHC still reneged on applying punitive actions to ensure prompt legal compliance by the Last Well and its contractors.

Reliable information gathered indicates that the Last Well which is an American NGO bent on using financial and American might to subdue nearly all public and private officials and institutions to its self-centered whims and caprices in Liberia, a postwar and third world country undergoing the worsening socio, political and economic situations in West Africa where monthly salaries or wages for job done are like a dream.

We, Civil Society Organizations working to ensure access to safe drinking water and improved sanitation and hygiene in Liberia are disappointed by the profound rift between the WASH Actors appalling dealings and issuing ambiguous statements that have the propensity to destroy good efforts in the WASH Sector, create credibility gap, continue governance fragmentation thereby undermine the entire WASH Sector and endangering the safety, peace and happiness of the Liberian People.

In view of the above reasons, the Liberia CSOS WASH Network calls on the Government especially the WASH Legislative Caucus to constitute joint independent investigation committee to shortly commence probing the saga and all said to be involved for the betterment of the sector and country.