Police Use Teargas To Disperse Protesters Who Resorted To ‘Undue’ Scene

Riot police in Monrovia have used teargas and water cannons to disperse dozens of “Council of Patriots” protesters who took to the streets Monday to demand the government to implement recommendations in a petition they claimed was presented during similar protest in June of last year.
The protesters were not chased out of the vicinity of Capitol Hill in minutes until they took rice, pots, charcoal and other such kits on the street sandwiched by the Capitol Building and the Executive Mansion, to indicate that they would spend the night there cooking.They reportedly failed to heed numerous police warning to desist from engaging in such action. That sparked the scuffle that led to the releasing of the teargas.
Moses Kayne, 37, a bystander who said he smartly escaped the teargas, told LINA after the run-about ceased, that the action on the part of the protesters was a provocation of the government.
“CoP did not first say that they were going to cook in front of the Executive Mansion and Capitol Building, so I don’t know why they decided to bring pots and cooking utensils,” he added, “They were about to cause public nuisance.”
According to the organizers of the protest, their January 6 action was a follow-up to the June 7, 2019 protest after which they “presented” a petition to the Government of Liberia to institute certain policy reform measures and promote transparency and accountability.
They want President George Weah to “unconditionally” publish his asset declaration form filed with the GAC/LACC; restructure the Technical Economic Management Team and conduct a criminal investigation into the alleged misuse of the US$25 million mop-up funds; apply the “same energy” used to “remove” an ex-Associate Justice Kabineh Ja’neh to get his folks to pass into law the Domestic Violence Bill (already passed into law), among others. 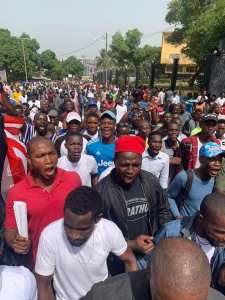 However, analysts suggest that some of the demands, particular about two radio stations are selfish, and that the government cannot be bullied by opposition politicians to take obvious national decisions on policy issues.
Interest groups such as the Liberia Council of Churches and member institutions of Liberia’s international partners, including the U.S. Embassy, ECOWAS, European Union, United Nations, have been negotiating between the CoP and the government, if possible, for CoP to back down on the protest for a dialogue.
The group insisted it would take to the streets as its constitutional and democratic right.
Meanwhile, the government says while it respects the democratic and constitution rights of every citizen; it cannot allow opposition politicians who lost to George Weah in the 2017 elections to want to run the affairs of the State in opposition.
Notwithstanding, it remains to be seen as yet whether the CoP will return to the street after its members ran from teargas into communities, some into the nearby building of the Ministry of Information.