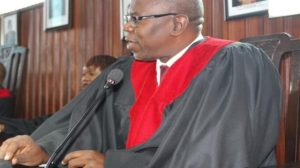 Associate Justice Yussif Kaba is expected to grants or deny prosecution lawyers petition this Wednesday, February 19, seeking to correct Judge Blamo Dixon’s alleged legal blunder to recuse himself from the case of five ex-Central Bank of Liberia alleged L$2.6 billion theft saga at the Criminal Court ‘C’ without any grounds.This follows legal argument between prosecution and defense lawyers before the outgoing Justice- in -Chamber at the Supreme Court as a result of prosecution petition for a Writ of Certiorari consistent with Chapter 16, Section 16.21 of the Civil Procedure Law of Liberia.
Justice Kaba pending ruling was announced through a notice of assignment citing all parties’ lawyers to appear in his Chamber on Wednesday, February 19, in connection with the ex-CBL governors’ alleged stealing of L$2.6 billion.
It can be recall that said Wednesday’s ruling will determine whether the matter will return at the Criminal Court ‘C’ for an expeditious hearing or remain at the High Court perpetually.
In September 2019, Associate Justice Yussif Kaba placed a stay order on the five ex-CBL Governors trial when state lawyers questioned Judge Dixon’s recusal decision from the case without stating any legal reliance in violation of the Judiciary Canon-28 for Judges.
Milton Weeks, Charles Sirleaf, Dobor Hagba, Joseph Dennis, and Richard H. Walker were arrested by the government of Liberia in connection to the L$2.6 billon missing money..
Following probe, it can be recalled that the five individuals were indicted by the court on charges of economic sabotage, criminal conspiracy, facilitation and solicitation.
The five former CBL officials also pleaded ‘not guilty’ to an additional charge of Money Laundering late last year